When people ask me for my true inspiration for becoming an entrepreneur, it was my original blog, “Driven to Succeed“, that I started on October 4th of 2006. The blog was  built on the Blogspot.com platform, which was popular from 2004 to 2007, before WordPress rose to prominent. After I graduated College in May of 2006, I felt that I need to help students learn from my success and mistakes so they could get a job upon graduation like I did. I wrote about how I was able to land internships and jobs, and created concepts that formed the mindset that I still have today. For instance, I talked about how to navigate corporate politics, create leverage in your career, develop a personal SWOT analysis, applied the 4 P’s of marketing to an individual and why marketing is an important skill for everyone (not just marketers). The only two readers I had were my mom and my friend from High School. The only commenter I had was my friend from High School because my mom didn’t know how to comment.

Fast forward to March 14th of 2007 after taking an incredibly long training class at my full-time job, I came home to my apartment and decided to figure out my place in the world. I mean, wouldn’t you after sitting in class for eight hours learning about over two thousand technical products that you would forget thirty seconds after class was over? I knew I wouldn’t be with my company forever and even since I was eight years old I always believed I would do something great with my life. Looking back, I believe I had this reasoning because I never fit into any social groups so instead of having a bad attitude I just considered myself special. 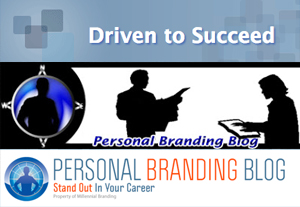 I came home and went right to my computer in search of a new career path, or at least a new hobby. I performed google searches and landed on an article written by Tom Peters in the August 1997 issue of Fast Company Magazine, entitled “The Brand Called You”. The article resonated with me immediately, as I had been marketing myself all along without ever mentioned the two words “personal branding”. When I was interviewing for internships and jobs, I had my own website, a business card, a references document, and a portfolio on top of the traditional resume and cover letter. When I was trying to get into college, I interviewed on campus and wrote admissions a letter. After reading the article, I performed more searches to see if anyone was speaking about this topic, and aside from older consultants that had businesses focused on personal branding, there were no Millennials talking about it. I immediately realized my potential for becoming the biggest personal branding voice for Millennials in the world. I had such a degree of confidence because the concept felt so natural to me and I saw there was an opportunity since there were no niche competitors.

I exported my blog posts from my original blog and imported them into a new blog hosted by WordPress.com under PersonalBrandingBlog.Wordpress.com. The site no longer exists because I had violated the terms of service by having advertisements. My passion was so great for the topic, that I blogged ten to twelve times a week outside of my full-time job. Back in 2006 and 2007, if you blogged, people would naturally find your content through Google and Technorati.com, which used to be a blog search engine but later changed business models. Starting a blog from scratch today without a budget would be daunting because you need ten times more marketing and PR to build an audience. The media was much less fragmented back in 2007. My main goal when I started the new blog was to own the front page of Google for the term “personal branding”, and still have two of the top ten results.

In order to make my blog a success, aside from writing constantly, I used a variety of tactics. First, I did a link exchange with some of the largest voices in the career space back then. This gave me some initial visibility, helped establish my blog network connections and generated some traffic to get the blog going. This strategy is no longer relevant today as Google demotes sites that exchange links. Second, I commented on every single blog in the world that even mentioned “personal branding”. I found these blogs by setting up a Google Alert for the term. By commenting on these blogs, I was investing in the community and my thought was “if you care about the topic, then you will also be interested in my blog”. Also, if you’re a blogger you in fact read all of your comments out of curiosity and for feedback. Third, I reached out to the same bloggers, and larger blogs, to do guest blog posts, which is still the best way to build your audience (as the top bloggers would attest). Each post was unique, catered to their audiences and linked back to my blog. Fourth, I started an interview series, where I would either have a call or communicate through email to solicit responses from a successful person, from Tim Ferriss to George Foreman. About half of those that were interviewed promoted their interview using their desired platform, which also helped grow the audience. Fifth, I was one of the original bloggers to form a syndication deal with sites like FoxNews.com and others. I was able to prove to these outlets that the content was valuable and would save them time. The timing was good as journalists were getting laid off, yet media sites needed content to get views, and thus more advertising revenue. I’ve since syndicated our content to Yahoo!, Entrepreneur.com, USNews.com, AOL Jobs, BusinessInsider.com and more. Today, you see most media companies syndicating various blogs but I was certainly on the forefront back in 2007 and 2008. For more strategies, and blogging basics, here is an eBook I wrote when I was promoting my first book “Me 2.0”.

As the blog was growing, I realized that I could no longer be the only voice on the blog. In 2007, I had also started a magazine and online TV show based on the blog so I needed to expand. I also moved the blog from WordPress.com to its own domain PersonalBrandingBlog.com. I brought on Maria Duron as the editor and started recruiting my network to be the contributors. Now with an editor and twenty contributors, we started pumping out over twenty posts per week, while I was focused on marketing the blog and creating more content partnerships. In the past ten years, the audience has grown from zero to over five million readers from 228 countries and with many syndication deals. We have worked with Media.net, Federated Media and BuySellAds to sell advertising for the blog so it could become self sufficient. The blog has also won many awards and received recognition from a variety of outlets including Forbes “Top Websites For Your Career” and CareerBuilder’s “Top Job Blog”. All of this has led to other initiatives and opportunities outside of the blog, but I will always admit that my original blog ignited my entrepreneurship journey.

My guest today is actor and film producer, Patrick Renna. Patrick is most known for his role as Ham … END_OF_DOCUMENT_TOKEN_TO_BE_REPLACED

My guest today is sports TV personality, radio host, and author, Stephen A. Smith. Stephen is the … END_OF_DOCUMENT_TOKEN_TO_BE_REPLACED

My guest today is actor, singer, writer, and producer, Corey Feldman. Corey is best known for his … END_OF_DOCUMENT_TOKEN_TO_BE_REPLACED