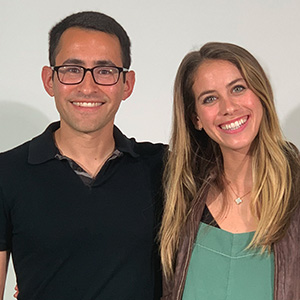 An interview with Lucie Fink about how her parents have influenced her creative process, how she’s turned her passion into her career, having the courage to put yourself out there, the secret to social media engagement and her best career advice.

Welcome to the 58th episode of 5 Questions with Dan Schawbel. As your host, my goal is to curate the best advice from the world’s smartest and most interesting people by asking them just 5 questions.

My guest today is video producer and lifestyle host for Refinery 29, Lucie Fink. Born in White Plains, New York to a radio DJ father and designer mother, Lucie has been a natural creative her entire life. After graduating from Johns Hopkins University, she worked as an Associate Producer at Ogilvy & Mather then became a producer and on-camera talent for Refinery29. At Refinery 29, Lucie created and hosts the award-winning YouTube series “Try Living with Lucie”, where she performs and documents her regular social experiments. She’s worked with brands such as Under Armour, M&M’s, Chase, Revlon, Reebok and many others. I’ve admired Lucie’s thoughtfulness and creativity when it comes to both content production and audience engagement for a while now so I was excited to speak to her for this podcast episode.

My guest today is writer, producer and director, Rodney Rothman. Rodney is best known for … END_OF_DOCUMENT_TOKEN_TO_BE_REPLACED

My guest today is actor and film producer, Patrick Renna. Patrick is most known for his role as Ham … END_OF_DOCUMENT_TOKEN_TO_BE_REPLACED

My guest today is sports TV personality, radio host, and author, Stephen A. Smith. Stephen is the … END_OF_DOCUMENT_TOKEN_TO_BE_REPLACED