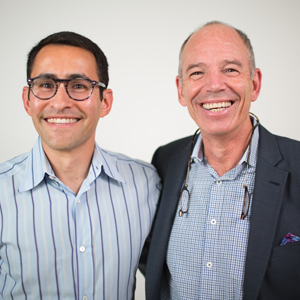 An interview with Marc Randolph how his family influenced him growing up, how to craft a compelling business pitch, how to overcome rejection, his relationship with his Netflix partner Reid Hastings and his best career advice.

Welcome to the 53rd episode of 5 Questions with Dan Schawbel. As your host, my goal is to curate the best advice from the world’s smartest and most interesting people by asking them just 5 questions.

My guest today is the co-founder and first CEO of Netflix, Marc Randolph. Born in Chappaqua, New York, Marc’s father was a nuclear engineer, his paternal great-granduncle was psychoanalysis pioneer Sigmund Freud and his paternal great-uncle was PR legend Edward Bernays. After he graduated college in 1981, he began working at Cherry Lane Music Company based in New York and was in charge of the small mail-order operation. It was there where he learned marketing techniques, how to sell music directly to customers and used technology to track buying behavior. Marc continued to gain experience building direct-to-consumer marketing operations at Borland, then at various Silicon Valley start-ups, before becoming a founder of Integrity QA. A year later, Pura Atria acquired his startup and CEO Reed Hastings retained Marc as VP of Corporate Marketing. Later that year, Rational Software acquired Pura Atria for $850 million. Marc and Reed decided to join forces to launch Netflix in 1998, with Marc as the first CEO. Today, Netflix has over 150 million paid subscribers worldwide watching over a billion hours of video content each week with $15.8 billion in revenue annually. I sat down with Marc to learn more about his fascinating background, hear stories from his new book “That Will Never Work” and get advice on everything from pitching an idea to overcoming criticism.

My guest today is writer, producer and director, Rodney Rothman. Rodney is best known for … END_OF_DOCUMENT_TOKEN_TO_BE_REPLACED

My guest today is actor and film producer, Patrick Renna. Patrick is most known for his role as Ham … END_OF_DOCUMENT_TOKEN_TO_BE_REPLACED

My guest today is sports TV personality, radio host, and author, Stephen A. Smith. Stephen is the … END_OF_DOCUMENT_TOKEN_TO_BE_REPLACED