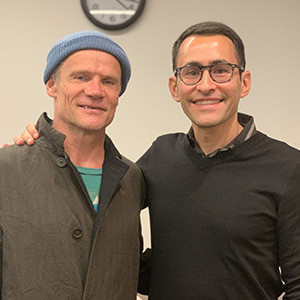 An interview with Flea how the relationship he had with his mom affected future relationships, why his stepfather was a blessing and a curse, why he views his friends as his family, how vulnerability has been his strength and his best career advice.

Welcome to the 63rd episode of 5 Questions with Dan Schawbel. As your host, my goal is to curate the best advice from the world’s smartest and most interesting people by asking them just 5 questions.

My guest today is the bassist and co-founder of the Red Hot Chili Peppers, Flea. Born in Melbourne, Australia, Michael Peter Balzary was nicknamed Flea as a teenager based on his inability to sit still. After moving to California, he attended Fairfax High School, where he started his lifelong friendship with Red Hot Chili Peppers lead singer Anthony Kiedis. Originally a jazz trumpet player, Flea later was introduced to rock music and the bass guitar by Hillel Slovak. Flea co-founded the Red Hot Chili Peppers in 1984 and since then they have released 11 studio albums that have sold over 80 million copies worldwide. In 2012, the band was inducted into the Rock and Roll Hall of Fame and Rolling Stone Magazine ranked Flea as the second-best bassist of all time. Flea is also the co-founder of the Silverlake Conservatory of Music, a non-profit music education organization for underprivileged children. I was very excited to speak to Flea about his relationships, life experiences and views that he wrote about in his new memoir “Acid for the Children” for this podcast.

My guest today is writer, producer and director, Rodney Rothman. Rodney is best known for … END_OF_DOCUMENT_TOKEN_TO_BE_REPLACED

My guest today is actor and film producer, Patrick Renna. Patrick is most known for his role as Ham … END_OF_DOCUMENT_TOKEN_TO_BE_REPLACED

My guest today is sports TV personality, radio host, and author, Stephen A. Smith. Stephen is the … END_OF_DOCUMENT_TOKEN_TO_BE_REPLACED