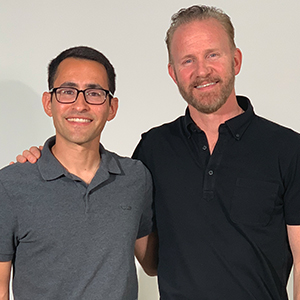 An interview with Morgan Spurlock about how he gets ideas for his projects, how documentaries get made, how he learned to be a storyteller, what his life purpose is and his best career advice.

Welcome to the 52nd episode of 5 Questions with Dan Schawbel. As your host, my goal is to curate the best advice from the world’s smartest and most interesting people by asking them just 5 questions.

My guest today is documentary filmmaker and producer, Morgan Spurlock. Born in Parkersburg, West Virginia, Morgan graduated from New York University’s Tisch School of the Arts in 1993. He started his career as a successful playwright before eventually producing Super Size Me, an Academy Award-nominated documentary that tracked his health as he ate three McDonalds meals each day for thirty days. I get sick to my stomach even thinking about it! This film completely changed my diet and led to my pursuit of a health lifestyle. Morgan has gone on to produce several other documentaries, including Where in the World is Osama Bin Laden?, Freakonomics and The Greatest Movie Ever Sold. More recently, he released his big follow up documentary, Super Size Me 2: Holy Chicken, which explores how the fast food industry has rebranded itself as healthier since the first film. The film isn’t what I expected at all. Morgan literally goes through the entire process of opening a fast food restaurant, called Holy Chicken, in order to expose the food industry. I had the opportunity to sit down with him the same week when he opened a pop-up restaurant in New York City.

My guest today is writer, producer and director, Rodney Rothman. Rodney is best known for … END_OF_DOCUMENT_TOKEN_TO_BE_REPLACED

My guest today is actor and film producer, Patrick Renna. Patrick is most known for his role as Ham … END_OF_DOCUMENT_TOKEN_TO_BE_REPLACED

My guest today is sports TV personality, radio host, and author, Stephen A. Smith. Stephen is the … END_OF_DOCUMENT_TOKEN_TO_BE_REPLACED