An interview with Elvis Duran about how he overcame mistakes in his childhood, how losing 100 pounds changed his life, coming out as gay, how do build a personal brand and his best career advice.

Welcome to the 50th episode of 5 Questions with Dan Schawbel. As your host, my goal is to curate the best advice from the world’s smartest and most interesting people by asking them just 5 questions. 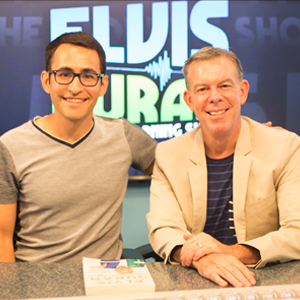 My guest today is nationally syndicated radio host, Elvis Duran. Born in McKinney, Texas, Elvis started his career as an on-air personality at WIOQ, Philadelphia’s top music radio station, and eventually became the program director before getting fired back in 1990. A year later, he became the program director and morning show host of KGSR in Austin, Texas. From there, he had a stint at Z-93 in Atlanta and 104 in Houston, before finally landing at Z100 in New York City. As the daily host of the Elvis Duran and the Morning Show, he and his team grew to thirty stations in a single year. Today, the show is America’s most-listened-to Top 40 morning show and one of the 10 most-listened-to programs in all of radio, heard live by nearly 10 million people in more than 80 markets across the country. Like me, Elvis has interviewed many successful people, but is rarely the one being interviewed. That’s why I was excited to talk to him about his new memoir “Where Do I Begin?” at his legendary studio here in New York City.

My guest today is writer, producer and director, Rodney Rothman. Rodney is best known for … END_OF_DOCUMENT_TOKEN_TO_BE_REPLACED

My guest today is actor and film producer, Patrick Renna. Patrick is most known for his role as Ham … END_OF_DOCUMENT_TOKEN_TO_BE_REPLACED

My guest today is sports TV personality, radio host, and author, Stephen A. Smith. Stephen is the … END_OF_DOCUMENT_TOKEN_TO_BE_REPLACED