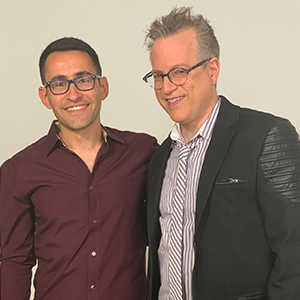 An interview with Ben Mezrich about how to get paid as a writer, how the stories he’s written changed how he lives, what he wish he knew before his first book, the elements of a compelling story and his best career advice.

Welcome to the 39th episode of 5 Questions with Dan Schawbel. As your host, my goal is to curate the best advice from the world’s smartest and most interesting people by asking them just 5 questions.

My guest today is New York Times bestselling author Ben Mezrich. Born in my hometown, Boston, Massachusetts, Ben is the son of a lawyer mother and radiologist father. He graduated Harvard University in 1991 with a degree in social studies. Over the course of a near two-decade career as a professional writer, he penned twenty books with over 4 million copies in print. His most famous work was Bringing Down the House, which was the story of MIT graduates who used a card counting system to make millions playing blackjack. The story was turned into the movie 21, which was released in 2008. Another notable book Ben wrote, and my favorite, was The Accidental Billionaires, which was adapted by Aaron Sorkin into the hit film The Social Network. In the story, he paints Facebook founder Mark Zuckerberg as a villainous college student who steal the idea for Facebook from Cameron and Tyler Winklevoss. In his latest book, Bitcoin Billionaires, Ben tells a redemption story of how the Winklevoss twins got rich by investing in Bitcoin. Dozens of people have tried to explain Bitcoin to me over the past few years and I still don’t get it, which is why this interview focuses more on Ben’s advice for becoming a professional writer.

My guest today is writer, producer and director, Rodney Rothman. Rodney is best known for … END_OF_DOCUMENT_TOKEN_TO_BE_REPLACED

My guest today is actor and film producer, Patrick Renna. Patrick is most known for his role as Ham … END_OF_DOCUMENT_TOKEN_TO_BE_REPLACED

My guest today is sports TV personality, radio host, and author, Stephen A. Smith. Stephen is the … END_OF_DOCUMENT_TOKEN_TO_BE_REPLACED