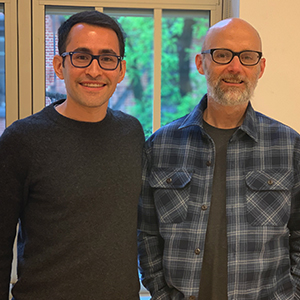 An interview with Moby about how growing up poor impacted him as an adult, how he recovered from the lowest point in his career, the positive influences in his life that came to his rescue, how he handles mental health and his best career advice.

Welcome to the 35th episode of 5 Questions with Dan Schawbel. As your host, my goal is to curate the best advice from the world’s smartest and most interesting people by asking them just 5 questions.

My guest today is songwriter, producer and author, Moby. Born Richard Melville Hall in Harlem, New York City, Moby was named after Herman Melville, who authored the classic Moby-Dick. His father died in a car crash while drinking when he was only two years old. His mother struggled to support him, relying on food stamps and welfare to make ends meet. His first job was a caddy on a golf course then took up music when he turned nine. Moby played guitar and his mom taught him how to play the piano. In 1983, he became the guitarist for the punk band The Vatican Commandos and started producing electronic music. After dropping out of college, he pursued his career as a DJ, eventually signing with Instinct Records in the mid-1990s. In 1999, Moby released his fifth and most well known album entitled Play, which sold over 12 million copies worldwide, and he went on tour for almost two years. He’s written two memoirs, Porcelain and his latest Then It Fell Apart, which we will be discussing in this episode.

My guest today is actor and film producer, Patrick Renna. Patrick is most known for his role as Ham … END_OF_DOCUMENT_TOKEN_TO_BE_REPLACED

My guest today is sports TV personality, radio host, and author, Stephen A. Smith. Stephen is the … END_OF_DOCUMENT_TOKEN_TO_BE_REPLACED

My guest today is actor, singer, writer, and producer, Corey Feldman. Corey is best known for his … END_OF_DOCUMENT_TOKEN_TO_BE_REPLACED