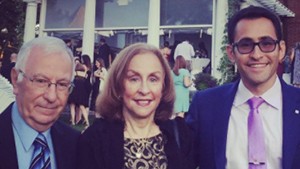 You don’t fully appreciate your parents until you reflect back on the decisions they made and how those decisions have manifested in your life. My upbringing accounts for the mentality, behavior and choices that I make today and into the future. I’ve met so many different people who have come from broken homes, where they didn’t receive the same attention, support and care that I did, which I’m eternally grateful for. Over the years, I’ve reflected on the characteristics, habits and viewpoints that I share with my parents. For instance, my mom literally brainwashed me to hate cats when I was a child and today I don’t want to go anywhere near them. My mom, and grandmother, recited “don’t smoke cigarettes” so regularly that anytime I see a cigarette, their face and voice appears in my head saying “don’t smoke cigarettes”. I get some of my goofy jokes and mannerisms from my father, and my anxiety from my mother. I like to tell people that I’m a split between both of them, but with a twist because my career and taste is different in many ways. The most valuable thing that you get from your parents is a set of core values. For me it was to be nice to everyone, work really hard, stand up for yourself and don’t rush into things.

After much deep thought, I have finally narrowed down the top four decisions that my parents made for me that have had by far the biggest long term impact on my career and life. Before making each decision, they were very stressed out and put a lot of thought into the potential outcomes and consequences. While they’ve made a lot of good, and a few poor, decisions throughout my life, these are the ones that most stood out to me.

My guest today is entrepreneur, reality TV star and author, Bethenny Frankel. Bethenny is the … END_OF_DOCUMENT_TOKEN_TO_BE_REPLACED

My guest today is actress and author, Jennifer Grey. Jennifer is best known for her lead role in … END_OF_DOCUMENT_TOKEN_TO_BE_REPLACED